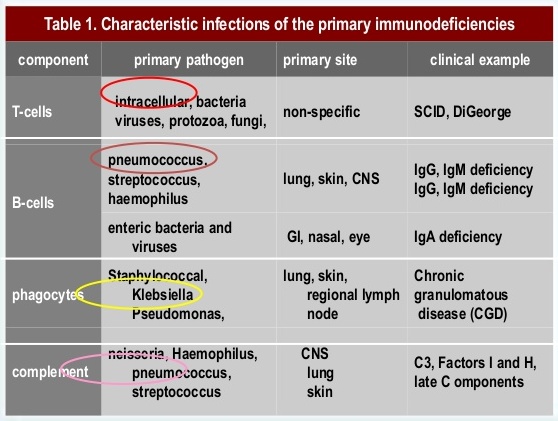 There are more than 200 different forms of primary immune deficiency diseases (PIDDs). NIAID conducts research across all PIDDs as well as among the individual diseases that make up this broad category. The following are some of the individual PIDDs that NIAID is currently studying.

Autoimmune lymphoproliferative syndrome (ALPS) is a rare immune disorder first described by NIH scientists in the mid-1990s that can cause numerous autoimmune problems, such as low levels of red blood cells, clot-forming platelets, and infection-fighting white blood cells. These problems can increase the risk of infection and hemorrhage. Read more about autoimmune lymphoproliferative syndrome (ALPS).

BENTA disease is a rare genetic disorder of the immune system caused by mutations in the gene CARD11. The disease is characterized by high levels of certain immune cells starting in infancy, an enlarged spleen, enlarged lymph nodes, immunodeficiency, and an elevated risk of lymphoma, a type of cancer Read more about BENTA disease.

Caspase eight deficiency state, or CEDS, is a very rare genetic disorder of the immune system caused by mutations in the CASP8 gene. CEDS is characterized by an enlarged spleen and lymph nodes, recurrent sinus and lung infections, recurrent viral infections, and a low level of infection-fighting antibodies. NIH researchers first described this condition in two siblings in 2002. Read more about CEDS.

CGD occurs when white blood cells called phagocytes are unable to kill certain bacteria and fungi, making people highly susceptible to some bacterial and fungal infections. Mutations in one of five different genes can cause this disease. Read more about chronic granulomatous disease (CGD).

CVID is caused by a variety of different genetic abnormalities that result in a defect in the capability of immune cells to produce normal amounts of protective antibodies. People with CVID experience frequent bacterial and viral infections of the upper airway, sinuses, and lungs. Read more about common variable immunodeficiency (CVID).

CTLA4 deficiency is a rare disorder that severely impairs the normal regulation of the immune system, resulting in conditions such as intestinal disease, respiratory infections, autoimmune problems, and enlarged lymph nodes, liver, and spleen. NIAID scientists and their collaborators identified the disease in 2014. Read more about CTLA4 deficiency.

DOCK8 immunodeficiency syndrome is a rare immune disorder named after the mutated gene responsible for the disease. The disorder causes decreased numbers of immune cells, as well as poor ability of immune cells to move across dense tissues like the skin. These abnormalities resulting from this disease lead to recurrent viral infections of the skin and respiratory system. Read more about DOCK8 immunodeficiency syndrome.

People with autosomal dominant hyper-immunoglobulin E syndrome (HIES) have recurrent bacterial infections of the skin and lungs, and typically also have eczema, distinct facial features, and a tendency to experience bone fractures. The disease has several other names, including Job's syndrome, STAT3 deficiency, and Buckley syndrome. Read more about hyper-immunoglobulin E syndrome.

Hyper-immunoglobulin M (IgM) syndromes are rare, inherited conditions in which the immune system fails to produce normal levels of the antibodies IgA, IgG and IgE but can produce normal or elevated levels of IgM. Various gene defects that impair communication between T cells and antibody-producing B cells can lead to hyper-IgM syndromes. Hyper-IgM syndromes can cause severe respiratory infections in infancy and a higher risk of rare infections throughout life. Treatment includes regular intravenous or subcutaneous antibody replacement therapy, anti-fungal prophylactics, and in some cases, bone marrow transplant from a healthy donor.

Interferon gamma, interleukin 12 and interleukin 23 deficiencies are rare, inherited immune disorders in which the body fails to produce one or more of these signaling molecules, which allow infection-fighting immune cells to communicate. Deficiencies in these molecules lead to increased ing infections. While many of these deficiencies begin to cause symptoms in infancy or childhood, some symptoms appear later in life. Treatment includes antibiotic therapy to prevent infections and, in some cases, bone marrow transplant from a healthy donor.susceptibility to bacterial and viral infections. Many people with these deficiencies develop granulomas, or inflammatory lesions that form in tissues and organs because ofecurr r

Leukocyte adhesion deficiency (LAD) is a rare, inherited immune disorder in which immune cells called phagocytes are unable to move to the site of an infection to fight off invading pathogens. People with LAD experience recurrent, life-threatening infections and poor wound healing. LAD is caused by a mutation in the gene ITGB2, which provides instructions for the phagocyte surface molecule CD18. Treatments for LAD include antibiotics to prevent and treat infection and, in some cases, bone marrow transplants from a healthy donor.

LRBA deficiency is a rare genetic disorder of the immune system caused by mutations in the LRBA gene. This disease impairs normal immune system function and results in autoimmunity, recurrent infections and an increased risk of lymphoma, a type of cancer. People with LRBA deficiency have excessive numbers of immune cells called lymphocytes, which sometimes enter and accumulate in organs where lymphocytes typically are not present in large numbers such as the gut, lungs and brain. This can cause a variety of symptoms. Read more about LRBA deficiency (fact sheet).

PI3 Kinase disease is caused by genetic mutations that overactivate an important immune-system signaling pathway. This causes a chain reaction of problems, disrupting the normal development of infection-fighting B and T cells. People with the disease have a weakened immune system and experience frequent bacterial and viral infections. Read more about PI3 kinase disease.

PLAID and PLAID-like diseases are rare immune disorders with overlapping features, and an allergic response to cold, called cold urticaria, is the most distinct symptom. Read more about PLCG2-associated antibody deficiency and immune dysregulation (PLAID).

SCID is a group of rare, life-threatening disorders caused by mutations in different genes involved in the development and function of infection-fighting T and B cells. Infants with SCID appear healthy at birth but are highly susceptible to severe infections. Read more about severe combined immunodeficiency (SCID).

Wiskott-Aldrich syndrome (WAS) is a rare genetic disorder of the immune system that primarily affects boys. WAS is an X-linked recessive disease caused by mutations in the WAS gene, which provides instructions for production of Wiskott-Aldrich syndrome protein. The disorder is characterized by abnormal immune function and a reduced ability to form blood clots. This can result in prolonged episodes of bleeding, recurrent bacterial and fungal infections, and increased risk of cancers and autoimmune diseases. Read more about WAS.

XLA is caused by an inability to produce B cells or immunoglobulins (antibodies), which are made by B cells. People with XLA develop frequent infections of the ears, throat, lungs, and sinuses. Read more about X-linked agammaglobulinemia (XLA).

XLP primarily affects boys and is characterized by a life-long vulnerability to Epstein-Barr virus (EBV), a common type of herpesvirus. People with XLP are healthy until they are exposed to EBV. Then, they can become seriously ill and experience swollen lymph nodes, an enlarged liver and spleen, hepatitis and lymphoma, a type of cancer. Read more about X-linked lymphoproliferative disease (XLP).

XMEN disease is a rare genetic disorder of the immune system. It is characterized by low levels of infection-fighting CD4+ cells, chronic Epstein-Barr virus (EBV) infection, and EBV-related lymphoproliferative disease, in which excessive numbers of immune cells are produced. NIH investigators first described XMEN disease in 2011. Read more about XMEN Disease and watch a video about how NIH scientists discovered the disease.