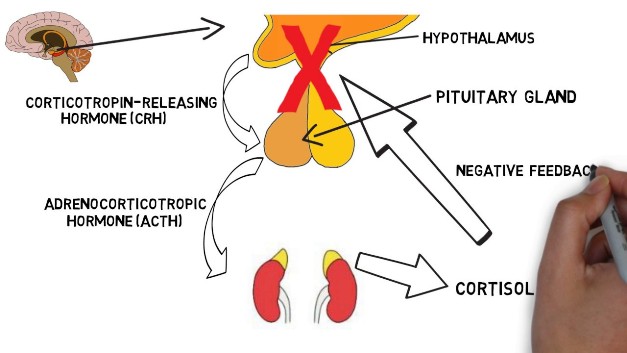 What is an adrenocorticotropic hormone (ACTH) test?

This test measures the level of adrenocorticotropic hormone (ACTH) in the blood. ACTH is a hormone made by the pituitary gland, a small gland at the base of the brain. ACTH controls the production of another hormone called cortisol. Cortisol is made by the adrenal glands, two small glands located above the kidneys. Cortisol plays an important role in helping you to:


Too much or too little cortisol can cause serious health problems.
Other names: Adrenocorticotropic hormone blood test, corticotropin

What is it used for?

An ACTH test is often done along with a cortisol test to diagnose disorders of the pituitary or adrenal glands. These include:

Why do I need an ACTH test?


Symptoms of too little cortisol include:

You may also need this test if you have symptoms of hypopituitarism. Symptoms will vary depending on the severity of the disease, but may include the following:

What happens during an ACTH test?

A health care professional will take a blood sample from a vein in your arm, using a small needle. After the needle is inserted, a small amount of blood will be collected into a test tube or vial. You may feel a little sting when the needle goes in or out. This usually takes less than five minutes.

Will I need to do anything to prepare for the test?

You may need to fast (not eat or drink) overnight before testing. Tests are usually done early in the morning because cortisol levels change throughout the day.

Are there any risks to the test?

There is very little risk to having a blood test. You may have slight pain or bruise at the spot where the needle was put in, but most symptoms go away quickly.

What do the results mean?

Results of an ACTH test are often compared with the results of cortisol tests and may show one of the following:


If you have questions about your results, talk to your health care provider.

Is there anything else I need to know about an ACTH test?

This health news has been brought to you by the publishers of Health Reviews, Tips and News Website. Visit today for great health tips and reviews.
Tags:
Conditions and Diseases Health News Health Reviews Medical Testing
Share: