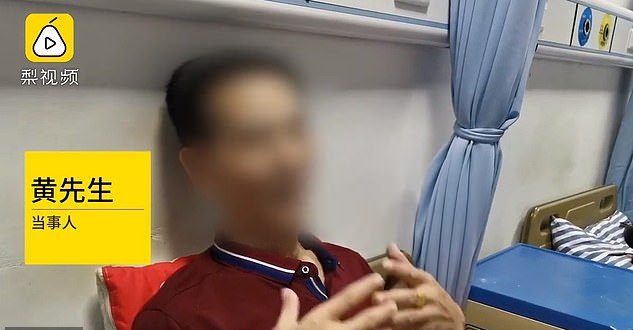 Wang told the Chinese video site PearVideo: 'I was very excited in the heat of the moment'

A Chinese man's lung collapsed after he attempted to belt out a high note during an intense karaoke session.

The 65-year-old, known only as Wang, sang ten high-pitched songs in a row before the incident, local media reports.

He said he didn't hold back because he felt 'excited' while singing his favourite tunes, which he didn't name.

But soon, Wang, from Nanchang county, the capital of Jiangxi province, became breathless and started suffering with chest pain.

Doctors at a hospital's emergency department found his lung had collapsed, due to the pressure created in the chest from singing.

The unfortunate event is not unheard of - in 2017, a One Direction fan suffered the same fate after screaming too loud during a concert.

Wang told the Chinese video site PearVideo: 'I was very excited in the heat of the moment and after singing a few songs with very high notes, I found myself having breathing difficulties.'

Wang had sung the set of songs many times before, and so his symptoms were unusual.

He decided to ignore the discomfort at that time, but the pain worsened after he went back home, according to the South China Morning Post, a Hong Kong-based English newspaper.

When he visited the emergency room the next day, tests including a chest X-ray revealed the truth.

The doctor said the mishap occurred due to 'the high lung pressure caused by singing high notes'.

A pneumothorax is when air builds up between the outside of your lung and the inside of your chest wall (ribcage).

The air can come from your lung or from outside your body if there’s a serious injury to the chest. A pneumothorax caused by leaks of air from the lungs is more common in people with a lung condition such as asthma or cystic fibrosis. But it can occur in people who are otherwise completely healthy.

A large pneumothorax can squash the lung causing it to collapse.

Because this condition is rare, it may take some time to get a diagnosis. Your doctor will need to consider other possible causes of your symptoms. You may need to have a few tests and you might need to see a specialist.

The treatment of a pneumothorax depends on its size and whether it’s expanding. If it’s small, no treatment may be needed. If it’s large, it will need to be drained using a syringe or a chest tube.

A collapsed lung is medically known as pneumonthorax, which usually occurs when the lung is punctured and air escapes into the chest cavity.

Leaks of air from the lungs is more common in people with a lung condition such as asthma or cystic fibrosis.

But it can occur in people who are otherwise completely healthy, and it is not clear whether Wang had any pre-existing lung disease.

Amateur singers have been advised they should not sing for more than two hours at a time if they want to avoid similar problems.

After the video went viral, reaching more than 100million views on social media, doctors waded in on the topic.

Peng Bin-fei, a doctor from the emergency department at Nanchang hospital, told PearVideo that this condition could prove life-threatening.

He said: 'The patient suffered from a lung collapse because of the high lung pressure caused by singing high notes.

'It’s better not to sing for a period of over two hours.'

Two years ago, a 16-year-old girl in Texas suffered a collapsed lung after screaming too loud at a One Direction concert the night before.

Writing in the Journal of Emergency Medicine, doctors said singing as a cause of pneumothorax had only once before been recorded in literature.

Weight-lifting, diving and military flying were all mentioned as potential causes of spontaneous pneumothorax by the medics.
Tags:
Health News Health Reviews
Share: