Home Health Reviews Father, 56, with persistent cough dies 16 DAYS after finding out it was bowel cancer

Father, 56, with persistent cough dies 16 DAYS after finding out it was bowel cancer 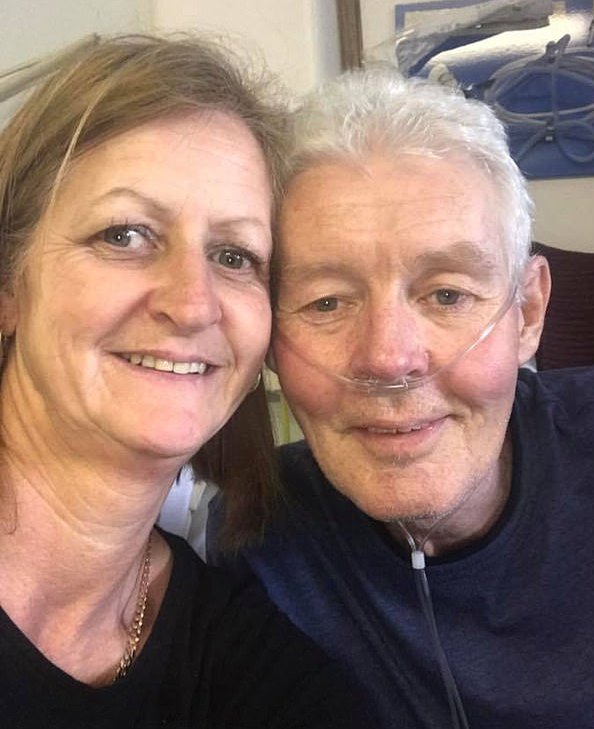 Father, 56, with persistent cough dies 16 DAYS after finding out it was bowel cancer

A mum is warning people to never ignore a persistent COUGH after her 'fit and healthy' hubby's sore throat turned out to be terminal cancer - and he sadly dropped dead 16 days later.

Trevor Walker, 56, died exactly 16 days after doctors discovered that the dad-of-three's two-month cough was caused by terminal bowel cancer that had spread to his lungs.

When the bathroom and kitchen fitter developed the cough, Trevor and his family presumed he had picked up a chest infection that had been going around as he had no other symptoms.

But the dad and his 'distraught' wife-of-24-years Mandie Walker, 50, were faced with the shocking news that Trevor's cough was actually the result of untreatable bowel cancer.

Football-mad part-time referee Trevor's last words to his wife and family were 'I love you all'.

Emotional footage from his funeral shows other local football referees attending in their kits and blowing a 'final whistle' for the charismatic dad.

Now full-time mum Mandie, who endured the 'traumatic' experience of watching her soul mate's health deteriorate so fast, is urging people to never just 'brush off' a persistent cough.

Mandie, of Plymouth, Devon, said: 'The first time Trevor and I heard the words bowel cancer from the doctors, we were stunned.

'We cried into each other's arms and said 'we'll fight this, we'll get through it, it will be fine'.

'It was such a shock. He had no symptoms. He had regular bowel movements, there wasn't any blood. All he had was this cough that everyone seemed to have.

'But it turned out the fluid on his lungs was secondary cancer because the bowel cancer had spread so far and so fast. It was devastating.

'From the day he was diagnosed to the day he died, was just 16 days. It was really traumatic seeing him deteriorate so rapidly. He lost so much weight, he was all skin and bones.

'He went from having no symptoms whatsoever just this cough that everyone put down to a chest infection.

'He was a very healthy young man. He was very fit. He was tall and slim. He hadn't smoked for more than 30 years. He wasn't a heavy drinker. He was conscious of what he ate.

'He was a football referee so he was always running around the pitch - usually three or four times a week - as well as working.

'For him to go downhill like that in 16 days - everybody was in total shock.

'I was there and our three children were all there with him when he went. His very last words were 'I love you all'.

'I lost my soul mate after 32 beautiful years together. I hold onto all the memories we had together - even those 16 days.'

Trevor developed the chesty cough just before Christmas 2017 and visited his GP in early January 2018 who put him on a 10-day course of antibiotics.

When his cough hadn't cleared up by the end of January, Trevor went back to the doctor and underwent a chest x-ray which showed fluid on his lungs consistent with a chest infection.

The grandad-of-three was put on a second 10-day course of antibiotics in the hopes it would shift the fluid but Trevor's cough persisted.

By early February, Trevor had become 'down and depressed' as he could no longer go to work, run around the football pitch or even walk more than 50 metres without getting breathless.

Constant coughing and spluttering also left Trevor unable to sleep unless he was sitting up and Mandie would often have to pat his back through the night to clear his chest.

But Mandie and her husband never worried it was anything more than a chest infection until she suddenly realised Trevor had lost a lot of weight when she saw him getting out of the shower.

At the time Madie's mum Julia Hammacott, who died aged 71 in May this year, had just been diagnosed with lung cancer and was also experiencing a bad cough and weight loss.

After expressing her concerns to Trevor's doctor, Mandie's husband was referred to hospital where they carried out blood tests and a biopsy of his lungs which revealed he had bowel cancer.

Further blood tests and a bowel biopsy tragically confirmed that the cancer was so advanced it could no longer be treated and Trevor was given three weeks to live.

Mandie said: 'Trevor developed this cough just before Christmas but we didn't really think much of it.
'At the time, there were so many people all over Plymouth and the country with a cough. There had been something going round.

'When the first course of antibiotics didn't work, we still just thought it was a chest infection and it was going to take time to clear up.

'He was getting really down and depressed because he couldn't do any of the things he usually would.
'The cough was so persistent it kept him up at night. He would have to sleep sitting up.

'It got to the stage, Trevor felt so weak and breathless he couldn't even stand in the shower. We've got a big walk-in shower so I went to get a garden chair to put in there he could sit on.

'It was only then, when I saw him coming out the shower and I looked at the back of him that I suddenly realised how much weight he had lost.

'He kept saying he hadn't but I told him 'this isn't right, you've lost too much weight'.

'After the biopsy, Trevor was allowed to come home but he was home less than 48 hours when we had to phone an ambulance.

'He felt really bad and he couldn't breathe even with the portable oxygen so he had to stay in the hospital after that.'

Trevor spent his final days in hospital on oxygen 24 hours a day to help him breathe and struggling to eat more than a couple of mouthfuls of food a day after losing his appetite.

Football-mad Trevor, who refereed three times a week for his local team in Plymouth, Devon, died on March 1 2018 surrounded by his loved ones.

Since the dad's sudden death, the local community have rallied around Mandie and sons Luke Walker, 31, and Barrie-John Walker, 24, and daughter Kerrie Walker, 26.

Trevor was so well-loved, his local pub, the Indian Inn, now have Trevor as a Native American on their sign and a memorial bench has been put in Tavistock town centre.

So many friends and family attended Trevor's funeral that people had to gather outside the crematorium and listen to the service on speakers.

While losing her husband has been devastating for Mandie, her kids and her grandkids, the mum said the support from everyone who loved Trevor has been a huge help.

Mandie said: 'Trevor was one of those people - everybody knew him and everybody loved him.
'He would do absolutely anything for anybody. If he only had a tenner to his name and you needed a tenner, he would give it to you.

'We got together 32 years ago. I met him in a pub. He used to play darts and I worked behind the bar. I just loved the look of him. He was full of confidence and had great banter.

'I always joked that Trevor had four loves in his life - his grandchildren, the children, football and me, in that order.

'But all the guys from his work tell me he was always talking about me and that he was so in love.
'He put me on a pedestal. I couldn't do anything wrong in his eyes and neither could our children. Kerrie was the only girl so she was his princess.

'Losing him has been so hard but we are a strong family. We have all really pulled together and we have had so much support from people around us.

'It has been so helpful and everyone has a nice word to say which makes it a bit easier.'

Since Trevor's death, Mandie has realised the importance of never ignoring a persistent cough and wants other people to understand that they can be a sign of serious illness.

Mandie said: 'Since Trevor's diagnosis I have gone over the symptoms of bowel cancer but he didn't have any of them.

'Although the symptoms are there as a guide, there's always going to be exceptions to the rules and that's what people need to think about more.

'If I come across anyone now with a persistent cough, I tell them to make sure they get it checked out by a doctor.

'In the past if it was me and I'd had the same cough as Trevor, I probably wouldn't have gone to the doctor.

'It's so easy to just brush it off as just a cough, especially when you see that everyone has one.
'But actually now I know that it's not always going to be fine. A persistent cough can be a sign of something really serious.

'And the doctors are there to help you, you just need to go see them.'

The NHS class a cough as persistent if it lasts more than three weeks and states that if a cough doesn't clear up on it's own within the first 21 days, people should visit their GP.
Tags:
Cancer Health News Health Reviews
Share: