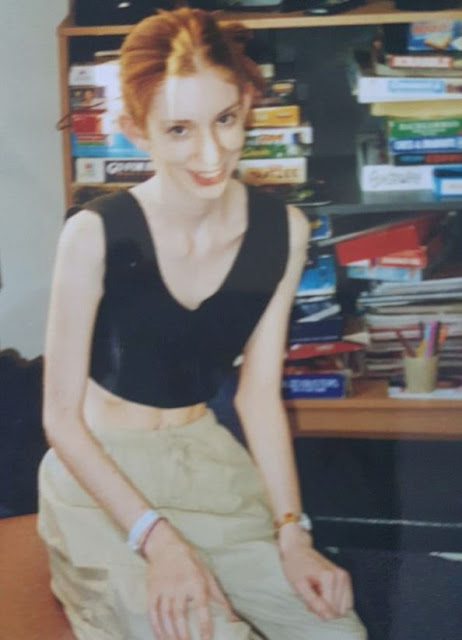 Vicki Carter, from Greater Manchester, battled with anorexia when she was 15 years old. Her eating disorder saw her drop from nine stone to four stone

A former anorexic who was once so gripped by her eating disorder she took her own parents to court to stop them feeding her now has her own 'miracle family' - after fearing she would never be able to have children.

As a teenager she would get up at 6am to exercise alone and eat nothing at all for days, sending her weight plummeting from nine stone to a skeletal four stone.

Her case was highly publicised in 1999 when, after being given just two weeks to live, she took parents David, 63, and Linda, 66, and the hospital caring for her to the high court in a bid to refuse treatment.

She lost the case, meaning she could be force-fed by doctors, which ultimately saved her life. 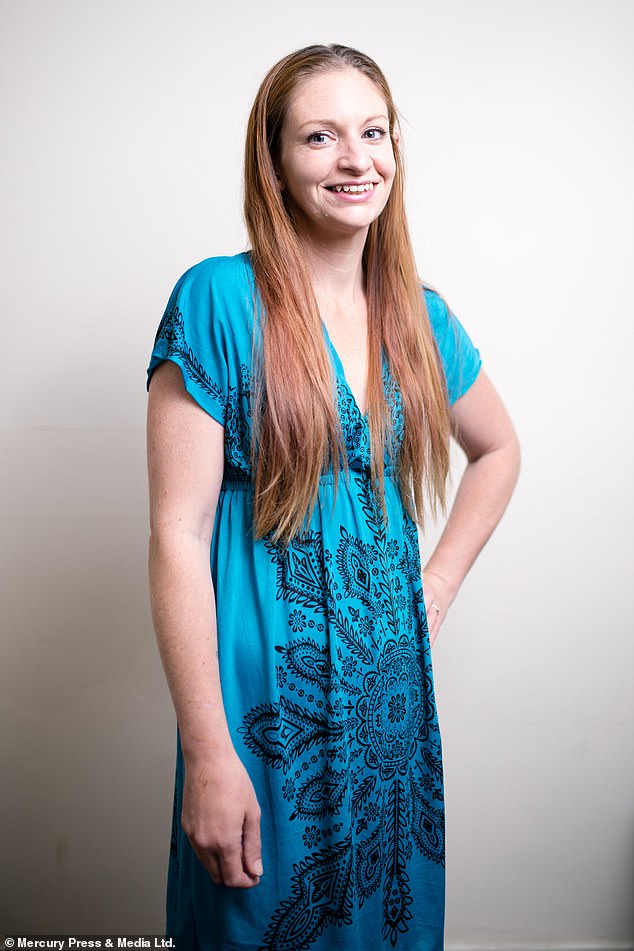 The counsellor, 36, has made an incredible U-turn 20 years later as she has beaten the condition and started a family of her own, despite fears her anorexia had damaged her fertility

After recovering in 2003 and fearing her former eating disorder had permanently damaged her fertility, Vicki was shocked to accidentally fall pregnant with son Finn, now aged nine, in 2010.

The mum-of-two, who welcomed her younger son Tobias, one, in February last year with partner Dan Stones, 28, a British Gas worker, said her miracle babies have helped her turn her life around 20 years on.

She said: 'I was 15 when I first got anorexia, I was going through that transition period with exams at school.

'I had glandular fever, I lost my appetite and never got it back - something just took over. 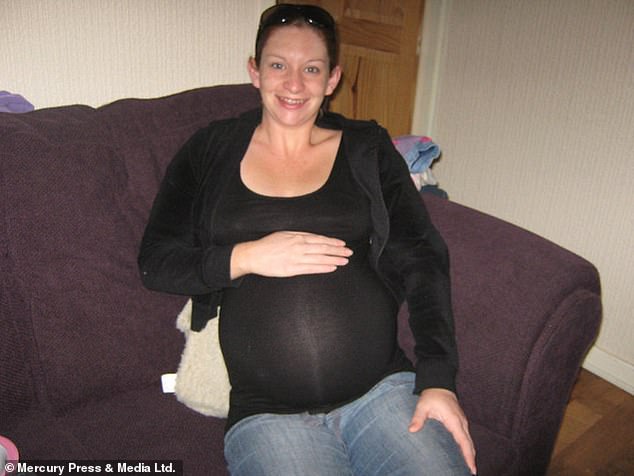 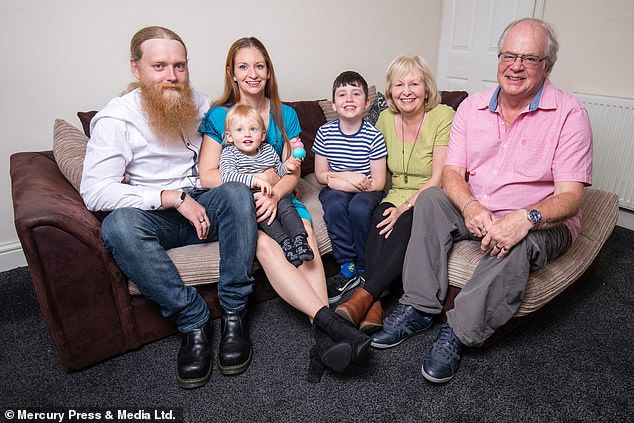 As a teenager Vicki took her parents Linda (right) and David (far right), as well as the hospital caring for her to court to stop them feeding her, which she lost. She has since rekindled her relationship with her family

'I started getting up at 6am to do aerobics and would eat as little as possible.'

Vicki insists her life has changed for the better and she now has a 'great relationship' with food, and even 'rolls her eyes' when someone tells her they are on a diet.

She continued: 'Now I have a great relationship with food - my attitude to eating is as different as it could possibly be.

'I eat normally, I enjoy takeaways and meals out with family and friends and with my partner Dan and I roll my eyes if I hear one of my friends say they are dieting or counting calories - life is too short. 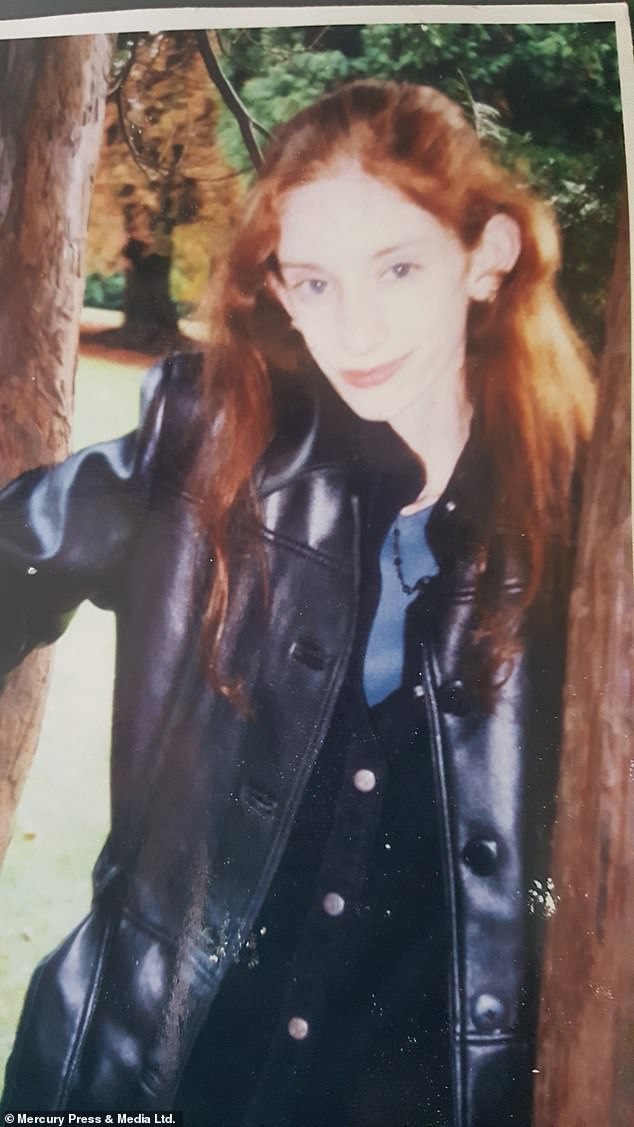 Vicki's anorexia came on when she started sitting exams at school, and her nervousness caused her to lose her appetite, which she claimed never returned until now 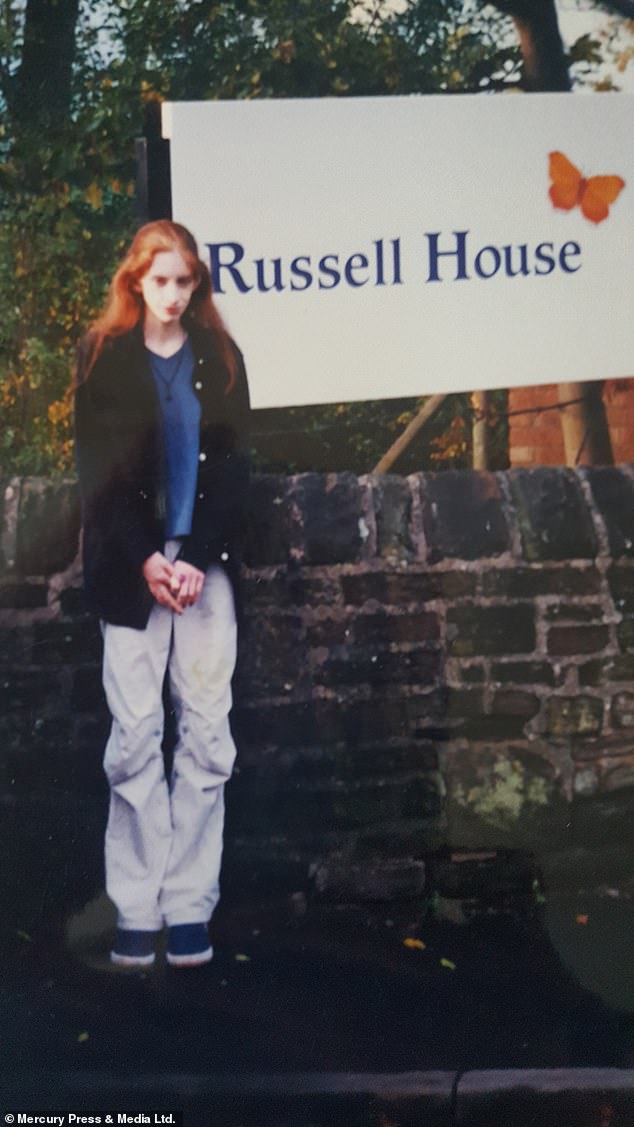 She suffered from glandular fever as a teenager which also sparked her eating disorder. For four years up until Vicki turned 19, she was in and out of hospital recovering from anorexia

'Being a parent has definitely helped my recovery. I like to think my kids could come and talk to me if they had any problems.

'My family now definitely feels like a blessing, it feels like the anorexia and court case was something which happened to someone else.'

After months of her worried parents taking her to doctor appointments as her weight continued to drop over a six month period, Vicki was eventually diagnosed with anorexia and depression in 1999.

The summer after finishing high school she was admitted to hospital and spent months on a ward, including her 16th birthday. 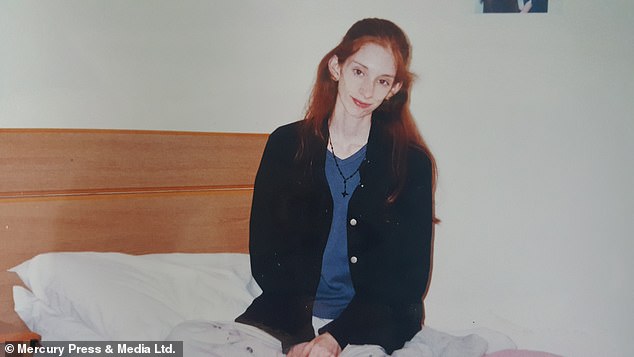 In 1999 Vicki was diagnosed not only with anorexia but depression, and spent her 16th birthday on a hospital ward

But after she turned 16, she gained legal rights - including the right to refuse treatment.

Her hospital, as well as parents David and Linda, argued she would be dead within two weeks and took Vicki to London's High Court to overcome her right to turn down the help she needed.

After losing the case, Vicki spent a further five months in hospital being force-fed before being discharged, only to fall ill again and spend a further six months on a ward.

She said: 'At the time of the court case I was at the blurred line between being a child and an adult. 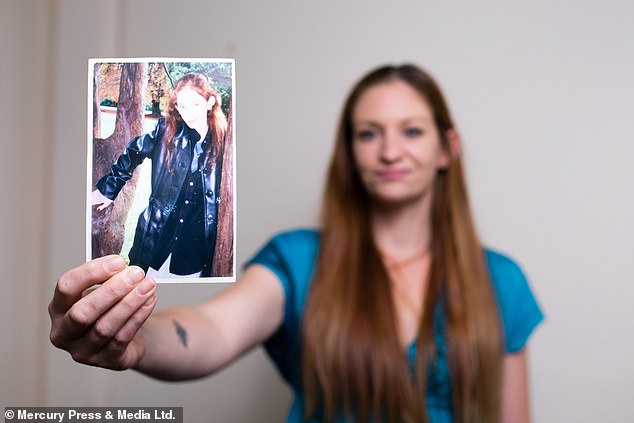 Vicki has insisted she now has a better relationship with food than she did 20 years ago, and she now can't stand it when she hears someone talking about going on a diet

'The doctors wanted to put me on a tube feed because my organs were shutting down - my body was eating itself.

'My argument was it may make me better in terms of weight gain, but it would not sort out what was going on in my head.

'But I lost the court case and they force-fed me via a tube that went down the back of my throat and into my stomach - it was horrendous.

'I would struggle and pull it out, so the feed would get trapped in my lungs. 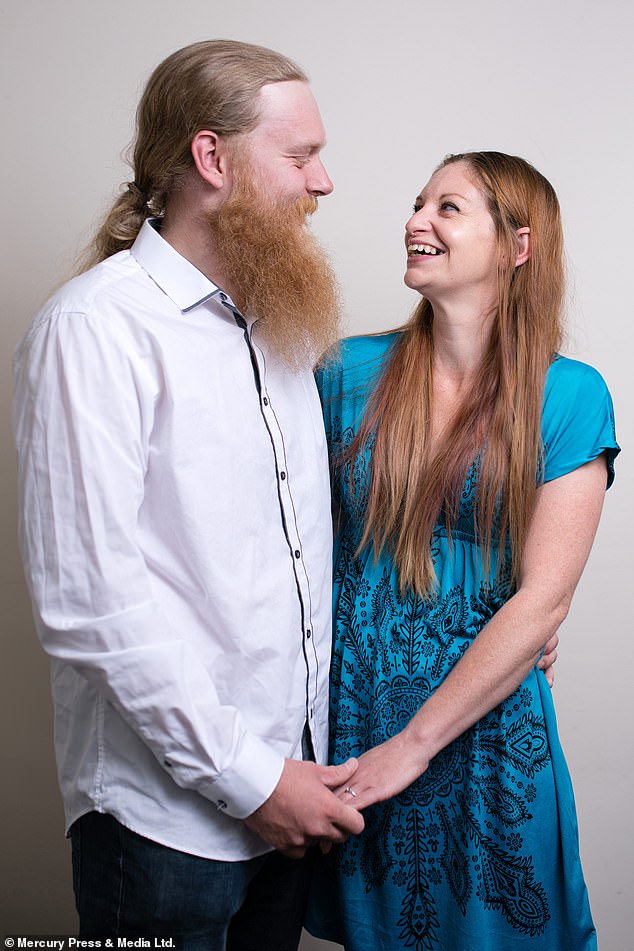 Vicki and partner Dan Stones have two children together, but were initially shocked when she accidentally fell pregnant in 2010 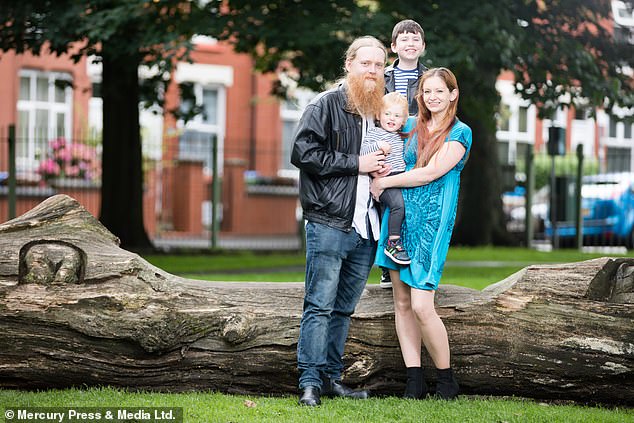 Vicki and Dan now have two children, Finn, nine, and one-year-old Tobias. The counsellor believes motherhood has helped her overcome her eating disorder as her attention is elsewhere

'Now, looking back, I didn't make it easy for the doctors and nurses on the ward - or my parents.

'My parents tried their best to understand, but I don't think people get it. Even now people don't get it.'

After finally being discharged from hospital for the last time aged 19, Vicki was almost recovered, although her appetite would lessen whenever she was confronted with a stressful situation. 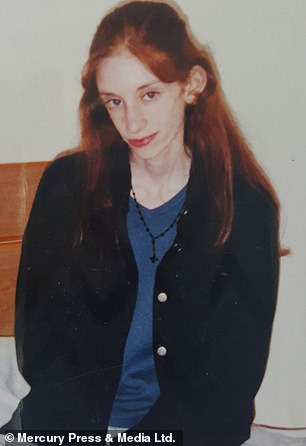 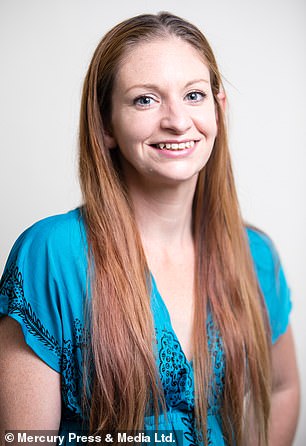 Vicki was in and out of hospital over the years with anorexia, and insisted while eating may help her body it would not treat her internal battles

Vicki works as an assistant child minder and said this helped her cope with life as she was looked up to and it helped her socialise with people again.

But her dramatic turnaround came at the age of 26, when she unexpectedly fell pregnant with eldest son Finn, now nine.

The development was all the more surprising as she had not had a period between the ages of 15 and 21 due to her eating disorder, which led her to believe the anorexia had irrevocably damaged her fertility. 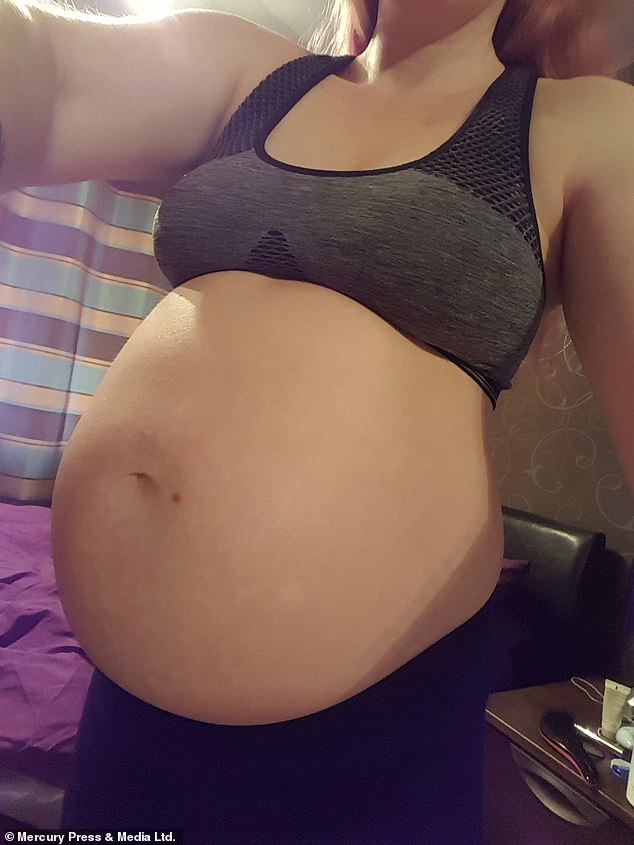 Vicki found out she was pregnant when she was 26 years old, despite having six years without a period because of her eating disorder 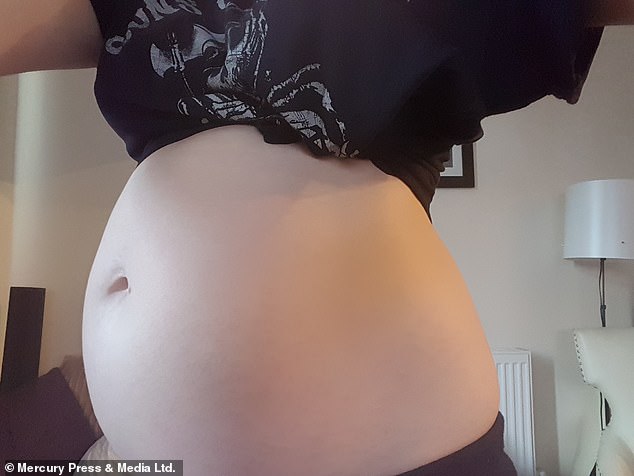 Vicki was craving crisps and cheese during her pregnancy, and since then she has not had any loss of appetite that she had experienced 10 years prior

But after developing cravings for crisps and cheese during her pregnancy, Vicki never had problems with her appetite again.

Vicki said: 'Eventually while I was still in hospital, something just clicked in my head that I didn't want life to be like this.

'It was never confirmed but it was believed I would never be able to conceive children - so when I got pregnant with Finn it was a huge surprise, most definitely.

'Being pregnant with Finn helped complete my recovery as I was responsible for nurturing another life, not just my own.' 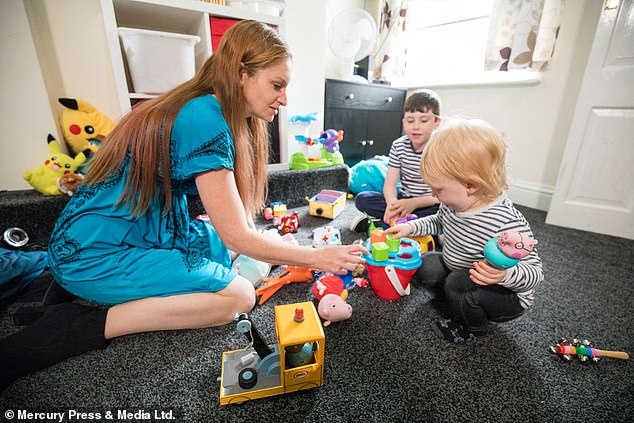 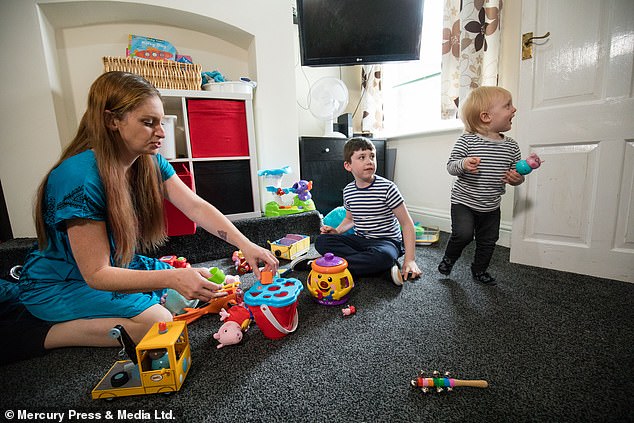 In 2017 Vicki fell pregnant again with youngest son Tobias, now aged one, with now-husband Dan.
Now she and Dan have recently bought their first family home and Vicki has trained as a counsellor helping other young people with eating disorders.

And while her relationship with her parents inevitably became strained during the court case, retiree David and childcare worker Linda are now regular visitors and play the role of doting grandparents to her kids.

Vicki said: 'My family are my absolute world, I really do not know what I would do without them.
'Having kids myself has helped me see how hard it was for my parents to see their child almost destroy herself.'
Tags:
Anorexia Health News Health Reviews Weight Loss
Share: