Gallstone sufferers may one day avoid surgery thanks to new discovery

Immune cells called neutrophils excrete DNA (red) and the enzyme neutrophil elastase (green) that together act as a glue. This sticky substance may cause cholesterol molecules to stick together to form gallstones. Human gallstones are pictured; scale bar 4mm

Scientists have discovered how gallstones are formed, in a move that could help sufferers avoid surgery.

It has long been known that cholesterol is a key component of gallstones, however, exactly how the molecules clump together was a mystery.

A team from University Hospital Erlangen, Germany, found neutrophils - a type of immune cell - excrete DNA and an enzyme that together act as a glue.

When the scientists gave 'NET-blocking drugs' to mice with the condition, the number and size of the stones reduced. In humans, the stones vary in size from the size of a grain of sand to a golf ball.

One of these drugs was the 'established' beta-blocker metoprolol, which is already prescribed to treat high blood pressure and chest pain.

The researchers hope metoprolol can be tested in human trials so it may one day enable patients to avoid the surgery required to remove gallstones.

'Neutrophils have long been considered the first line of defense against infection, and have been shown to generate NETs that entangle and kill pathogens,' senior author Dr Martin Herrmann said.

'Here, we provide additional evidence for the double-edged sword nature of these NETs by showing they play an important role in the assembly and growth of gallstones.

'Targeting neutrophils and NET formation may become an attractive instrument to prevent gallstones in high-risk populations.'

Between 10 and 15 per cent of adults in the UK have gallstones, Royal College of Surgeons statistics show.

And in the US, around 15 per cent of Americans suffer, according to the World Gastroenterology Organisation.

Gallstones form in the gallbladder, which releases bile into the small intestine during meals to break down fat.

The stones do not typically cause symptoms or require treatment. However, if one becomes trapped in a duct of the gallbladder, it can trigger intense abdominal pain.

Some sufferers also develop inflammation of the gallbladder, which can lead to jaundice and fever.

In these cases, keyhole surgery to remove the gallblader is usually recommended via a procedure called laparoscopic cholecystectomy.

This is one of the most common surgeries performed on adults in the US, the researchers wrote.
Although a relatively simple operation, it takes up to two weeks before patients are back to doing their day-to-day activities.

The surgery also carries the risk of a wound infection, bile leaking into the abdomen, damage to the ducts that carry bile to the liver and blood clots.

Gallstones are lumps of sold material that form in the gallbladder.

In the UK, up to one in 10 adults have the condition. It affects around 15 per cent of people in the US.
Gallstones can resemble grains of sand or large pebbles.

They are formed from chemicals in bile and can consist of just cholesterol, a mixture of calcium and a pigment from red blood cells, or a combination of the two.

Gallstones have been linked to high-cholesterol diets, as well as liver damage and fasting.
Most people are unaware they have gallstones.

The most common symptom is abdominal pain, which can last up to eight hours and be severe.
This may be mistaken for a heart attack.

Pain occurs due to the gallbladder trying to expel the stones.

If gallstones have been discovered via a scan for something else and are not causing symptoms, they are often left without treatment.

Gallbladder inflammation may require antibiotics to be administered in hospital.

Severe symptoms may lead to people having the organ removed.

The gallbladder, which is involved in digestion, is not essential for life.

Medication can dissolve gallstones, however, it is rarely effective.

The drugs, called ursodeoxycholic acid tablets, also need to be taken for up to two years, with the stones recurring in some cases.

Confusion about how gallstones form was a 'hurdle limiting the development of new treatments', the researchers wrote.

They first became suspicious a 'glue' may be involved while examining small stones in the bile of patients who were having stents fitted.

Stents restore the flow of blood or other fluids if one of the body's passageways becomes blocked.

The researchers found large clumps of DNA, as well as the enzyme neutrophil elastase, which breaks down proteins, on these stones.

Higher amounts of the enzyme and DNA were found on the surface of larger stones. Together, these molecules are 'tell-tale signs of NETs', the researchers wrote.

NETs help fight infection but have also been linked to autoimmune and inflammatory conditions.

To determine what triggers NET formation, the team combined cholesterol crystals with human neutrophils in the laboratory. This caused DNA to be released from the immune cells.

They then 'attached' gallstones to a rotating device, and spun it in fluid that both did and did not contain neutrophils.

When spun with neutrophils, patches of DNA and neutrophil elastase quickly formed on the gallstones' surface.

NETs are thought to glue cholesterol and calcium crystals together to form gallstones. DNA then wraps around these structures to make them bigger.

In the final part of the experiment, the researchers fed mice a cholesterol-rich diet that led to gallstones.

The gallstones were fewer and smaller in the rodents with genetic defects that prevented NET formation. Animals with fewer neutrophils also had smaller gallstones.

Some of the mice's diets were then supplemented with PAD4 inhibitors, which inhibit NET formation, or the beta-blocker metoprolol, which interferes with its movement.

Both supplements completely blocked the growth of gallstones that were already there.

'The possibility of stopping these processes with new PAD4 inhibitors or with metoprolol, an established beta-blocker, may introduce new therapeutic strategies that avoid surgery,' lead author Dr Luis Muñoz said.

'However, human studies are required to establish new therapies for gallstone disease.

'Hopefully, we can convince pharmaceutical companies to perform a clinical study with inhibitors of NET formation or NET aggregation.' 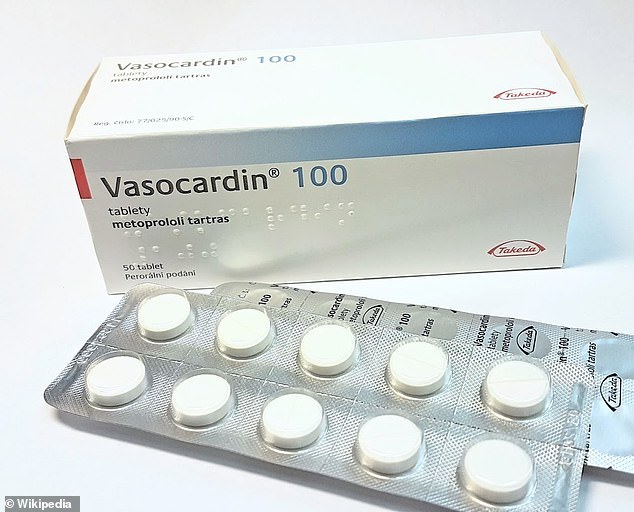