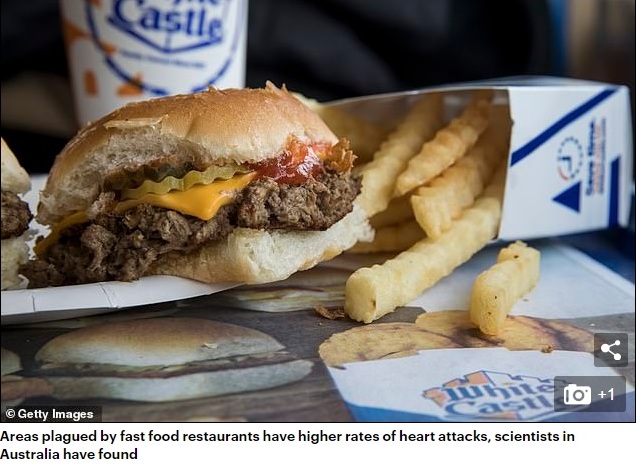 Researchers in Australia found the more takeaway chains there were in an area, the more of the killer cardiac events occurred.

Scientists used data from 3,070 patients admitted to hospitals in New South Wales with a heart attack between 2011 and 2013.

Each patient's home address was noted, so experts could see how many fast-food chains existed in each of their neighborhoods.

For every additional takeaway store in the area, there were roughly four more heart attacks per 1,000 people every year, the experts found.

The findings were the same in both rural and urban areas, even after adjusting for other risk factors of a heart attack, including high blood pressure.

Experts at the University of Newcastle presented the study at the annual Scientific Meeting of the Cardiac Society of Australia and New Zealand.

Study author Tarunpreet Saluja said: 'The results emphasize the importance of the food environment as a potential contributor towards health.'

Fast food outlets were defined as the ten most popular quick service food retailers in Australia, based on a population survey conducted in 2018.

The scientists did not explain why the link exists - nor did they acknowledge poorer areas are more likely to have an abundance of fast food stores.

And it's previously been found that areas with a large number of takeout shops have more obese residents - obesity is a risk factor for heart disease.

Research from Cambridge University suggested in 2014 that people most exposed to takeaway shops are nearly twice as likely to be obese.

Coronary heart disease is one of the leading causes of death across the world. Heart attacks are listed as a main symptom of CHD by the NHS.

There are more than 100,000 hospital admissions in the UK each year due to heart attacks, which is one every five minutes, according to the British Heart Foundation.

The charity state that heart and circulatory diseases cause more than a quarter of all deaths in the UK.

Mr Saluja voiced concerns that despite common knowledge fast food is unhealthy, people are eating more of it because it is so readily available.

In the UK, a fifth of adults and children eat takeaway meals at home once a week or more, according to Public Health England.

'Yet the role of greater access to these restaurants has been less clear.'

The team hopes their findings will show policy-makers that risks of heart disease are not only down to personal choice but the environment they live in.

Professor Tom Marwick, chair of the CSANZ 2019 Scientific Programme Committee, said: 'The fact that the appropriate policy steps have not been taken, despite the cost of cardiovascular disease, remains as much a mystery in Australia as elsewhere in the world.

'It will be crucial to explore whether this association is independent of the social determinants of disease, as we know that fast food outlets are often more common in disadvantaged areas.'

'In addition to regulating the location and density of fast food outlets, local areas should ensure good access to supermarkets with healthy food.'