All health insurers in Illinois must now cover EpiPens for children, according to legislation signed into law on Tuesday.

Prices for the life-saving emergency allergy injections have sky rocketed over the last decade.

Without insurance, a pack of three EpiPens costs about $300 - a cost that many parents simply can't afford, but is still cheaper than the $1,634 average monthly cost of health insurance for a family.

And there's nothing stopping those pricey insurance plans from excluding EpiPens, leaving parents to pay for both healthcare and the anaphylactic shock antidote.

Illinois is setting a different precedent, however, forcing all insurers providing coverage in the state to pay at least part of the cost of children's EpiPens when they're deemed medically necessary. 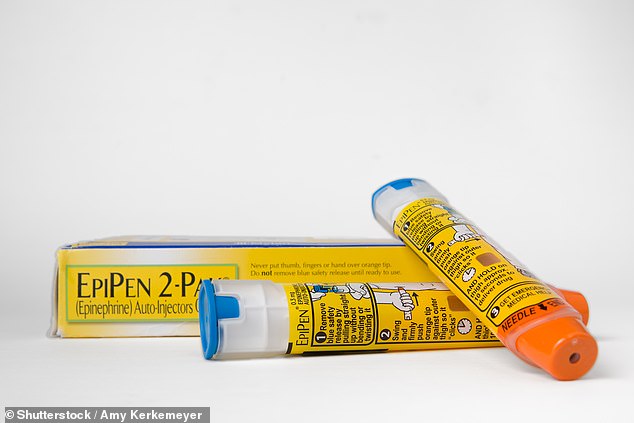 EpiPens for children now must be covered by all health insurance companies providing care in the state of Illinois thanks to a new, first-of-its-kind state bill signed into law on Tuesday

An estimated 200 people die of food allergies every year.

When an allergy is severe enough, it can trigger anaphylactic shock, in which the throat swells and closes, and the person can no longer breath.

Some of these fatalities are children, who may be ill-equipped to recognize or communicate what's happening to them.

The shot of epinephrine, or adrenaline, in an EpiPen, can cut short the reaction, reducing swelling and allowing the throat to re-open.

Some states, including New York, have introduced legislation that requires workers be trained to prepare food without cross contamination that can be deadly for children with allergies.

This legislation - called Elijah's law, after a little boy who died after his daycare gave him food to which he was deathly allergic and failed to respond properly - also requires daycare workers to be trained to administer an EpiPen.

But that training is all for naught if children's families can't afford an EpiPen to send with them to daycare or school.

Illinois is the first state to take steps to make sure that that won't happen.

House Bill 3435 was signed into law by Governor JB Pritzker on Tuesday and will to into effect on January 1, 2020.

From then on out all insurers will have to cover EpiPens for children with severe enough allergies for doctors to deem the anaphylaxis antidote necessary.

That will likely include about 40 percent of the one in 13 kids who've gone into anaphylactic shock from food allergies.

But it won't include the 2.9 percent of Illinois children who are still uninsured.

Mylan got FDA approval for a generic form of the EpiPen shot earlier this year - but $109 a pen is far from 'affordable for those living below the poverty.

Still, the state considers it a win for kids' healthcare where few efforts have managed to offset rising drug prices.

'This legilsation takes a big step forward in protecting our children and families,' said Governor Pritzker in a Tuesday tweet.