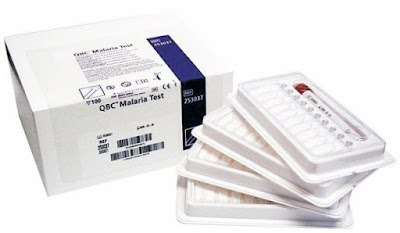 What are malaria tests?

Malaria is a serious disease caused by a parasite. Parasites are tiny plants or animals that get nutrients by living off another creature. Parasites that cause malaria are passed to humans through the bite of infected mosquitos. At first, malaria symptoms may be similar to those of the flu. Later on, malaria can lead to life-threatening complications.

Malaria is not contagious like a cold or flu, but it can be spread from person to person by mosquitos. If a mosquito bites an infected person, it will spread the parasite to anyone it bites afterward. If you are bitten by an infected mosquito, the parasites will travel into your bloodstream. The parasites will multiply inside your red blood cells and cause illness. Malaria tests look for signs of a malaria infection in the blood.

Malaria is common in tropical and subtropical areas. Every year, millions of people are infected with malaria, and hundreds of thousands of people die from the disease. Most people who die from malaria are young children in Africa. While malaria is found in more than 87 countries, most infections and deaths happen in Africa. Malaria is rare in the United States. But U.S. citizens who travel to Africa and other tropical countries are at risk for getting infected.

What are they used for?

Malaria tests are used to diagnose malaria. If malaria is diagnosed and treated early, it can usually be cured. Left untreated, malaria can lead to life-threatening complications, including kidney failure, liver failure, and internal bleeding.

Why do I need a malaria test?

You may need this test if you live or have recently traveled to an area where malaria is common and you have symptoms of malaria. Most people will have symptoms within 14 days of being bitten by an infected mosquito. But symptoms can show up as soon as seven days afterward or can take as long as a year to appear. In the early stages of infection, malaria symptoms are similar to the flu, and may include:
In the later stages of infection, symptoms are more serious and may include:

What happens during a malaria test?

Your health care provider will probably ask about your symptoms and for details on your recent travels. If an infection is suspected, your blood will be tested to check for signs of a malaria infection.

During a blood test, a health care professional will take a blood sample from a vein in your arm, using a small needle. After the needle is inserted, a small amount of blood will be collected into a test tube or vial. You may feel a little sting when the needle goes in or out. This usually takes less than five minutes.

Your blood sample may be tested in one or both of the following ways.

Will I need to do anything to prepare for the test?

You don't any special preparations for a malaria test.

Are there any risks to the test?

There is very little risk to having a blood test. You may have slight pain or bruising at the spot where the needle was put in, but most symptoms go away quickly.

What do the results mean?

If your results were negative, but you still have malaria symptoms, you may need retesting. The number of malaria parasites can vary at times. So your provider may order blood smears every 12-24 hours over a period of two to three days. It's important to find out whether you have malaria so you can get treated quickly.

If your results were positive, your health care provider will prescribe medicine to treat the disease. The type of medicine will depend on your age, how serious your malaria symptoms are, and whether you are pregnant. When treated early, most cases of malaria can be cured.

Is there anything else I need to know about malaria tests?

If you will be traveling to an area where malaria is common, talk to your health care provider before you go. He or she may prescribe a medicine that can help prevent malaria.

There are also steps you can take to prevent mosquito bites. This may reduce your risk of getting malaria and other infections transmitted by mosquitos. To prevent bites, you should:

This health news has been brought to you by the publishers of Health Reviews, Tips and News Website. Visit today for great health tips and reviews.
Tags:
Health News Health Reviews Medical Testing
Share: