Thousands of over-treated diabetes patients wind up in the ER with LOW blood sugar, study finds 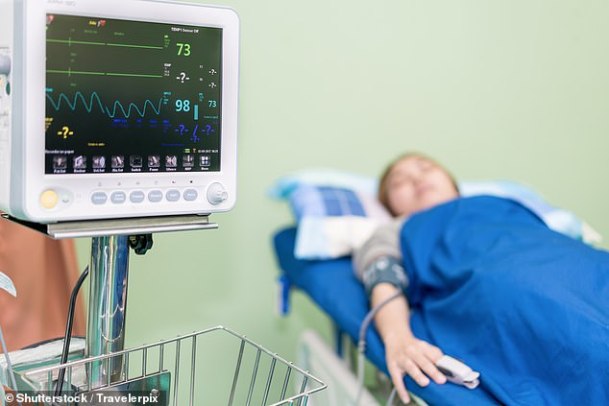 A new study from the Mayo Clinic has found that Americans being over-treated for diabetes contributed directly to 4,774 hospitalizations and 4,804 emergency department visits )file image)

Over-treatment for diabetes lands thousands in the emergency room with hypoglycemia every year, a new study finds.

Researchers from the Mayo Clinic found that more than 20 percent of US adult diabetes patients received medication that drove their blood sugar levels too low.

This directly contributed to nearly 4,800 ER visits and 4,700 hospitalizations over a two-year period.

Hypoglycemia can increase the risk of cardiovascular disease, bone fractures and even death.
The team says the findings suggest that treatment plans for diabetes patients need to be more individualized and evidence-based to prevent visits to the emergency department.

More than 30 million Americans-  about 9.4 percent of the population - suffers from diabetes, and other 84 million are at high risk of diabetes, according to the Centers for Disease Control and Prevention.

People with diabetes wind up with excess glucose - a kind of sugar, and a vital source of energy to the body -  in their bloodstreams and often take medications like Glyxambi, NovoLog and Precose to manage their blood sugar.

Diabetes occurs when there are too few beta cells in the pancreas to produce insulin or when they produce very little insulin, the hormone needed to get glucose from the bloodstream into cells.

When left untreated, diabetes can result in serious health complications such as kidney damage, eye damage, heart disease, stroke and even vision loss.

There are many reasons why diabetes patients may experience low blood sugar, or hypoglycemia.

However, those with diabetes may also develop low blood sugar as a byproduct of patients receiving medication that lowers blood sugar levels too low.

'Hypoglycemia, or low blood glucose, is one of the most common serious adverse effects of diabetes therapy, causing both immediate and long-term harm to patients who experience it,' said lead author Dr Rozalina McCoy, an endocrinologist at the Mayo Clinic.
'Severe hypoglycemia, defined by the need for another person to help the patient treat and terminate their hypoglycemic event, is associated with increased risk of death, cardiovascular disease, cognitive impairment, falls and fractures, and poor quality of life.'

For the study, published in Mayo Clinic Proceedings, the team analyzed data from the National Health and Nutrition Examination Survey between 2011 and 2014 and the OptumLabs Data Warehouse.

Researchers used levels of hemoglobin A1c (HbA1c), which is the average level of blood sugar, to examine whether patients were being over-treated.

Normal levels for those without diabetes fall between four percent and 5.6 percent.
Levels between 5.7 percent and 6.4 percent are linked to a higher risk of developing diabetes and levels 6.5 percent or higher mean you have diabetes.

They identified about 10.7 million adults with diabetes, and found that about 22 percent, or 2.3 million, were being 'intensively treated'.

Blood glucose levels that are persistently too high raise the risk of diabetes complications, including cardiovascular disease and kidney disease.

The team says it's important for diabetes patients to take glucose-lowering medications, but treatment plans should be individualized.