Vaping has sent 22 people in the Midwest to the hospital 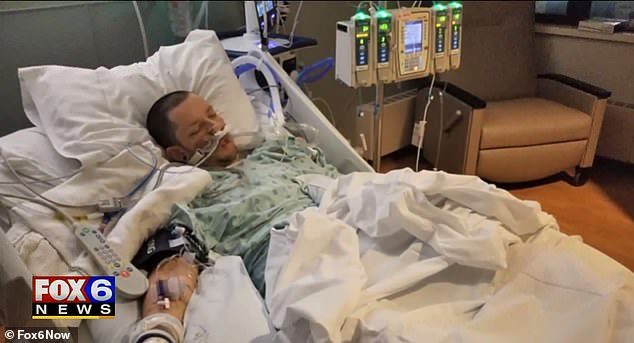 At least 22 people - mostly teenagers and young adults - in the Midwest have been hospitalized with lung damage related to vaping, including 26-year-old Dylan Nelson (pictured) of Wisconsin, who was put in a medically induced coma after his lungs started failing

The number of Americans hospitalized for serious breathing problems linked to vaping has surged to 22.

In Wisconsin, 12 people have been admitted to hospitals for e-cig-linked lung trouble, as have six in Illinois and four in Minnesota.

And many of the patients are teenagers or otherwise healthy young adults.

The slew of sick e-cigarette users comes just after a Food and Drug Administration (FDA) report revealed that at least 127 Americans have had vaping-related seizures.

Little is known about the chemicals in e-cigarettes or exactly how they might be wreaking havoc on the lungs, but all of the patients have vaping in common, raising the alarm among doctors in the Midwest and nationwide.


Four teenagers between 16 and 18 have been admitted to Minnesota Children's Hospital, according to CBS.

The hospital's chief medical officer, Dr Emily Chapman, explained that doctors at first thought the teens had some sort of respiratory infection.

They presented with similar symptoms to pneumonia or bacterial infections, like coughing, sharp pain and shortness of breath.

But standard treatments for these kinds of illnesses didn't help.

Doctors instead determined that the patients had 'acute injury' to their lungs.

Whatever had happened to their lungs had done extensive damage.

The organs were failing and some patients even had to be put on ventilators.

And they all had one thing in common: they had been vaping.

Some of the patients said they used nicotine e-cigarette liquid, while others used marijuana e-liquids.
Which chemicals are responsible for decimating their lungs remains unclear.

But it's not the first time that vaping has been the common thread in a string of health problems.

Last week, the FDA said that it had received 127 reports of people who had had seizures after vaping, and urged more Americans to come forward if they'd experienced similar symptoms.

Around the same time, a rising college freshman in Florida told DailyMail.com in an exclusive interview that using a trendy Juul for a year was responsible for the collapsed lung that nearly killed him.

Oddly, most of the other reports of teens severely sickened by e-cigarettes have come from the Midwest.

Dylan Nelson, a 26-year-old vaper in Wisconsin, had to be placed in a medically-induced coma after using a vape cartridge his brother said he'd bought off the street.

And a further six 'youths' in Illinois wound up in area hospitals.

'While the short- and long-term effects of vaping are still being researched, these recent hospitalizations heighten the need for parents talk with their teens about vaping and for both to understand the consequences and potential dangers of vaping, Dr Ngozi Ezike, Illinois Department of Public Health director, said in a statement.

The slew of vaping-related hospitalizations has put the Midwest on high alert.

Indiana hospitals have not reported any cases of respiratory distress from e-cigarettes, but the state's health department is urging medical providers to report any they encounter to it.