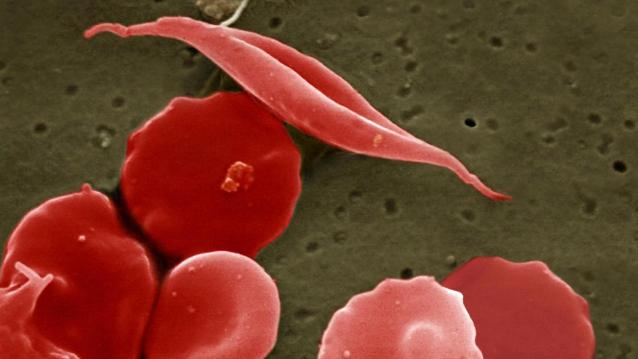 ‘Forward-oriented’ design might boost treatment effectiveness and broaden use.
Researchers at the National Institutes of Health have developed a new and improved viral vector - a virus-based vehicle that delivers therapeutic genes - for use in gene therapy for sickle cell disease. In advanced lab tests using animal models, the new vector was up to 10 times more efficient at incorporating corrective genes into bone marrow stem cells than the conventional vectors currently used, and it had a carrying capacity of up to six times higher, the researchers report.

The development of the vector could make gene therapy for sickle cell disease much more effective and pave the way for wider use of it as a curative approach for the painful, life-threatening blood disorder. Sickle cell disease affects about 100,000 people in the United States and millions worldwide.

“Our new vector is an important breakthrough in the field of gene therapy for sickle cell disease,” said study senior author John Tisdale, M.D., chief of the Cellular and Molecular Therapeutics Branch at the National Heart, Lung, and Blood Institute (NHLBI). “It’s the new kid on the block and represents a substantial improvement in our ability to produce high capacity, high-efficiency vectors for treating this devastating disorder.”

Researchers have used virus-based vehicles for years in gene therapy experiments, where they have been very effective at delivering therapeutic genes to bone marrow stem cells in the lab before returning them to the body. But there’s always room for improvement in their design in order to optimize effectiveness, Tisdale noted. He compared the new virus-based vehicle to a new and improved car that is also far easier and cheaper for the factory to produce.

The study was supported by the NHLBI and the National Institute of Diabetes and Digestive and Kidney Diseases (NIDDK), both part of the NIH. It was published online today in Nature Communications.

Sickle cell disease is an inherited blood disorder caused by a mutation, or misspelling, in the beta-globin gene (or β-globin gene). This mutation causes hemoglobin, the main ingredient of blood cells, to produce sickle-shaped cells that can stick to the walls of blood vessels, causing blockage, pain, anemia, organ damage, and early death. With gene therapy, doctors modify the patient’s bone marrow hematopoietic (blood-producing) stem cells in the lab by adding a normal copy of the beta-globin gene through the use of a viral vector. They then reinfuse the modified stem cells into the patient to produce normal, disc-shaped red blood cells.

For the past 30 years, researchers have been designing these beta-globin vectors in reverse structural orientation, meaning the therapeutic genes incorporated into the virus are translated, or “read,” from right to left by the viral vector-making machinery - much like reading an English sentence backwards. The reason for the reverse orientation is the sensitive expression of a key molecular component of the vector called intron 2.

This segment is required for high-level beta-globin gene expression but gets clipped out during the normal vector preparation process if it is left in the natural, forward direction. Gene therapy trials using reverse-oriented vectors for sickle cell disease and beta-thalassemia have largely been encouraging, the researchers said, but this complicated gene translation process has made vector preparation and gene-transfer efficiency more difficult.

About 10 years ago, Tisdale and Naoya Uchida, M.D., Ph.D., a staff scientist in his lab, searched for an improved delivery vehicle - like designing a better car - and decided to undertake a radical redesign of the beta-globin vector. They came up with a unique workaround design that left intron 2 intact and created the new forward-oriented beta-globin vector. In contrast to the old vector, the gene sequence, or “message,” of the new beta-globin vector is read from left to right - like reading a normal sentence - making the gene translation approach less complicated, Tisdale explained.

The researchers tested the new vectors in mice and monkeys and compared the results to reverse-oriented vectors. They found that the new vectors could transfer a much higher viral load - up to six times more therapeutic beta-globin genes than the conventional vectors - and had four to 10 times higher transduction efficiency, a measure of the ability to incorporate corrective genes into repopulating bone marrow cells.

The new vectors also showed a capacity for longevity, remaining in place four years after transplantation. Researchers also found that they could be produced in much higher amounts than the conventional vectors, potentially saving time and lowering costs associated with large-scale vector production.

“Our lab has been working on improving beta-globin vectors for almost a decade…and finally decided to try something radically different - and it worked,” Tisdale said. “These findings bring us closer to a curative gene therapy approach for hemoglobin disorders.”

The new vector, for which the NIH holds the patent, still needs to undergo clinical testing in humans. Already an estimated 27 people with sickle cell disease have undergone experimental gene therapy using conventional vectors. Through its Cure Sickle Cell Initiative, NIH is working to accelerate the development of these and other new genetic therapies, including gene editing, with the goal of finding a cure for the disease. The initiative is part of NIH’s larger multi-pronged approach to reducing the burden of blood disorders. People with sickle cell disease can visit clinicaltrials.gov to find a clinical trial that is actively enrolling.

About the National Heart, Lung, and Blood Institute (NHLBI): NHLBI is the global leader in conducting and supporting research in heart, lung, and blood diseases and sleep disorders that advances scientific knowledge, improves public health, and saves lives. For more information, visit www.nhlbi.nih.gov.

About the National Institutes of Health (NIH): NIH, the nation's medical research agency, includes 27 Institutes and Centers and is a component of the U.S. Department of Health and Human Services. NIH is the primary federal agency conducting and supporting basic, clinical, and translational medical research, and is investigating the causes, treatments, and cures for both common and rare diseases. For more information about NIH and its programs, visit www.nih.gov.

This health news has been brought to you by the publishers of Health Reviews, Tips and News Website. Visit today for great health tips and reviews.
Tags:
Conditions and Diseases Genetics Health News Health Reviews Research
Share: