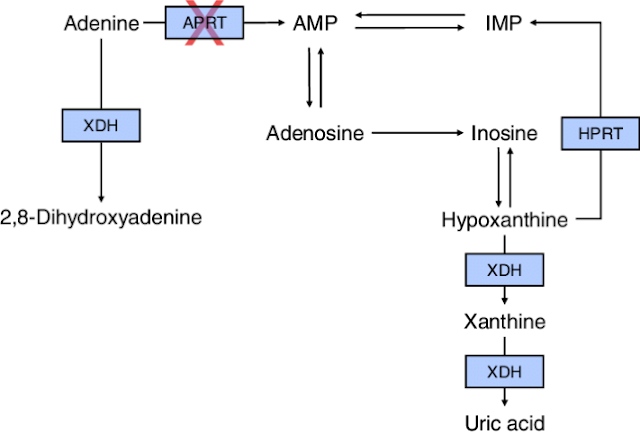 Affected individuals can develop features of this condition anytime from infancy to late adulthood. When the condition appears in infancy, the first sign is usually the presence of tiny grains of reddish-brown material in the baby's diaper caused by the passing of stones. Later, recurrent kidney and urinary tract stones can lead to problems with kidney function beginning as early as mid- to late childhood.

Approximately half of individuals with APRT deficiency first experience signs and symptoms of the condition in adulthood. The first features in affected adults are usually kidney stones and related urinary problems. Other signs and symptoms of APRT deficiency caused by kidney and urinary tract stones include fever, urinary tract infection, blood in the urine (hematuria), abdominal cramps, nausea, and vomiting.

Without treatment, kidney function can decline, which may lead to end-stage renal disease (ESRD). ESRD is a life-threatening failure of kidney function that occurs when the kidneys are no longer able to filter fluids and waste products from the body effectively.

The features of this condition and their severity vary greatly among affected individuals, even among members of the same family. It is estimated that 15 to 20 percent of people with APRT deficiency do not have any signs or symptoms of the condition.

Mutations in the APRT gene cause APRT deficiency. This gene provides instructions for making APRT, an enzyme that helps to convert a DNA building block (nucleotide) called adenine to a molecule called adenosine monophosphate (AMP). This conversion occurs when AMP is needed as a source of energy for cells.

APRT gene mutations lead to the production of an abnormal APRT enzyme with reduced function or prevent the production of any enzyme. A lack of functional enzyme impairs the conversion of adenine to AMP. As a result, adenine is converted to another molecule called 2,8-dihydroxyadenine (2,8-DHA).

2,8-DHA crystallizes in urine, forming stones in the kidneys and urinary tract. 2,8-DHA crystals are brownish in color, which explains why affected infants frequently have dark urine stains in their diapers. 2,8-DHA is toxic to kidneys, which may explain the possible decline in kidney function and the progression to ESRD.
Tags:
Genetics Health News Health Reviews
Share: