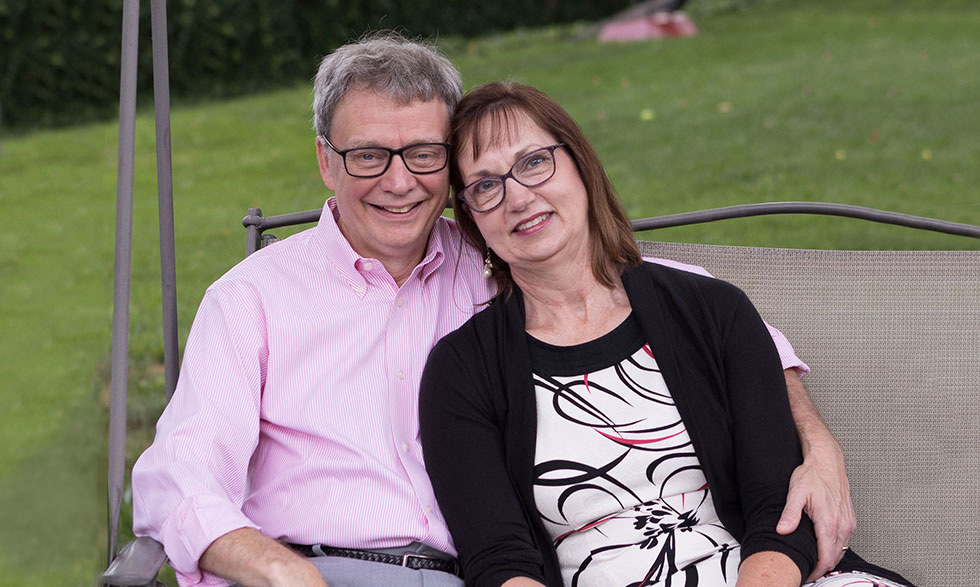 "I was a person used to giving an hour-long presentation to 400 people with minimal notes. Everything flowed," Randal says.

But in 2011, when he was 55 years old, something changed. During a speech for his consulting business, he couldn't find the right words to say. He also couldn't keep track of a project he was leading for work, which wasn't like him.

It turns out, these were early signs of Lewy body dementia (LBD). The disease causes people to forget things, lose their balance, and have trouble moving and thinking. Over time, it causes serious mental and physical decline.

In the following months, Randal and his wife, Lisa, noticed more changes.

He had tremors in his hands that he couldn't control. He forgot how to do everyday things.

When Lisa's car had a flat tire, she called Randal, her go-to car guru. But he didn't know how to help.
"It was a real shock, and I had a bit of anger, because I felt let down," she says. Was depression causing him to lose focus at work? Were the tremors a sign of Parkinson's disease?

As his symptoms worsened in 2013, Randal and Lisa went to his primary care doctor to find out what was wrong. He ended up visiting three different doctors over eight months before he was diagnosed.

Randal now takes medications to control the tremors in his hands and to slow the disease's effects on his thinking and concentration.

He also goes to physical therapy regularly, which helps with his balance. He gets massage therapy and Botox injections for muscle tightness in his legs.

To help him solve everyday problems, like using a computer mouse or eating, Randal sees an occupational therapist.

Randal and Lisa say it's been a challenge coping with Lewy body dementia. The symptoms get worse, but not in a predictable way.

"Active doesn't have to mean physically active. What is most important is that you are doing something and you can feel like you are valuable."
- Lisa G.


"Some days I can load and unload the dishwasher with no problem at all," Randal says. "But some days I can deal with the bowls and the silverware, but can't deal with other things"
Those kinds of ups and downs are hard for a person with Lewy body dementia.

"I believe it's also difficult for the caregiver," Randal says. One way Randal copes with LBD is by staying active.

For several years, he volunteered two days a week in a community garden. He also helped farmers set up their booths at a local farmer's market.

For people who think they might have LBD, Lisa recommends that their loved ones take detailed notes of behavior and other changes, as well as the dates they happen. She says it helped with her husband's diagnosis.

Another way that Randal copes is helping other people with Lewy body dementia.
He volunteers for medical studies and undergoes regular MRIs and other tests to help expand researchers' knowledge about the disease. Randal also participates in online and in-person support groups.

Randal and Lisa have shared their experiences with members of the LBD community and the Lewy Body Dementia Association, a nonprofit organization established to support people with LBD and their families, increase public awareness, and raise money for research.

Their advice for other families with LBD is to try and work around your changing symptoms, as hard as it may be, and ask for help when you need it. Staying active is also key.

"Active doesn't have to mean physically active, or leaving your home," Lisa says. "It can be, but the situation changes with the disease. What is most important is that you are doing something and you can feel like you are valuable."

Randal G. shared lessons to help others adjust to life with Lewy body dementia. His tips have been edited for space.